Somalia generally has a semi-arid to arid climate. The main climatic features are the existence of distinct wet and dry seasons and the absence of any large seasonal temperature change. Rainfall is the most important meteorological element affecting life in Somalia. It is the defining characteristic of the climate and has great spatial and temporal variability. The dramatic variation from season to season - and variations within the seasons - is what determine the successes or failure of agricultural activities. 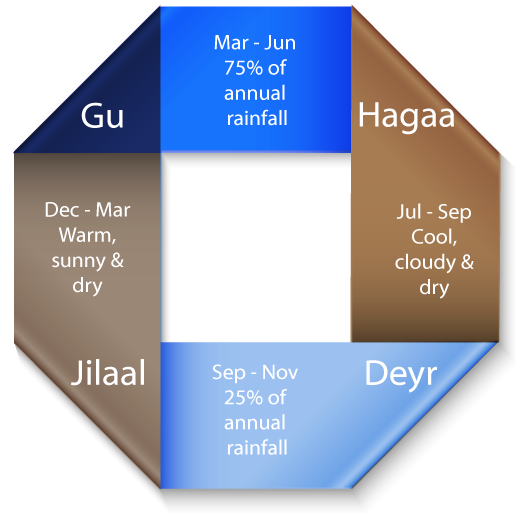 The year is divided into four seasons as follows:

For more details on Somalia’s Climate, download Climate of Somalia, a technical report produced by SWALIM in 2007 using the most recent comprehensive data available from the FAO global climate database (for the period between 1963 – 1990). While the database lacks information for some stations in some periods, missing data was extrapolated to improve analysis in the Climate of Somalia Report.