Somalia is in the second year of a severe drought—the kind that is increasingly likely as the climate warms.

All the water dependent sectors have been adversely affected, reflecting different levels of drought preparedness in Somalia. For now, urban areas are in a better shape, thanks to diversified humanitarian aid in the country. The greatest vulnerabilities are in some low-income rural communities where water resources are running dry. Two years of drought has increased challenges in all areas and require continued—and likely increasingly difficult—adaptations. Emergency programs will need to be significantly expanded to get drinking water to rural residents and livestock. Somalia therefore needs to start a longer-term effort to build drought resilience in the most vulnerable areas.

Somali communities were looking forward to a relief from the Gu 2017 rainfall season but the devastating drought conditions meant that the country experienced yet another below-average season affecting the recovery of the key livelihood sectors; agricultural and livestock. So far, drought conditions continues to affect Somalia; a situation that may persist until the next rainy season in October.

The Gu rainy season was generally poor in most parts of the country except some places in Puntland and Somaliland that saw good rains during the month of May. The southern regions of Middle Juba, Lower Juba and southern Bay also recorded good rains during the months of May and June. Regions that recorded very poor rains include Mududg, Galgaduud, Hiraan, Middle Shabelle, Lower Shabelle, Bakool, Gedo and southern parts of Bay.

The Gu rains were sporadic and scattered. In March, a few pockets of Somaliland recorded good rains followed by a long dry period until end of April when the rains started in most parts albeit very late. The rains then spread in space, time and quantity in May. While many parts continued to receive rains until the last week of May, there was an early cessation of the rains in parts of south and central regions except South of Bay and Middle and Lower Juba regions that continued to receive rains in June.

Even with the rains, most parts of the country remain under drought conditions with the impacts being felt across the country. More rains are required to end the ongoing drought in the country and the drought situation is expected to continue until the coming Deyr season in October.

It is important to note that only 20% to 40% of the ground water sources have been sufficiently recharged throughout the country. The rest remain water stressed.

If El Niño predictions for late 2017 prove correct, Deyr rainfall in Somalia could be substantial. Most climate models gives the El Niño event a 45 percent chance of returning in 2017. El Niño events tends to cause enhanced rainfall events in Somalia, generally cool temperatures and lots of run-off, which would be good for both ground and surface water recharge in the country. 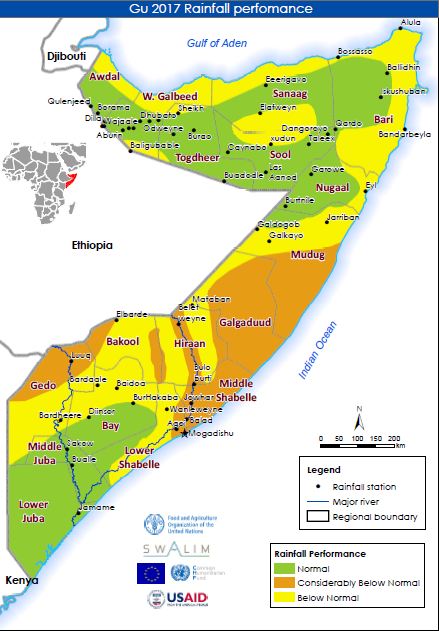