Impacts of river breakages monitoring on communities along the Shabelle River

The Juba and Shabelle rivers of Somalia have fertile soils and abundant amount of water that allows irrigated agriculture to be carried out throughout the year, making the riverine areas of the two rivers traditionally the bread basket of Somalia. However, the two rivers are prone to flooding mainly because the bulk of their flow originate from the Ethiopian highlands, which receives very high rainfall during the rainy seasons.

Before the collapse of the Somali government, the irrigation system was well developed and managed effectively controlling flooding. The irrigation infrastructure was coordinated and maintained by River Management Authorities established under the Ministry of Agriculture. The authorities regulate river flow to ensure fair access to water by upstream and downstream users.
They also maintained the river including dredging of the river bed and strengthening of the river banks.
Today, this system is no longer working and flooding occurs almost every season, especially in the middle and lower reaches of Shebelle river. This is mainly because of unregulated irrigation system, sediment deposition on the river channel and weak river banks. Additionally, farmers break the river banks to get water to their farms during the dry season. Frequent flooding has been causing havoc to communities along the two rivers with heavy loses of human lives, livestock, crops and damage of roads and other infrastructure.
To minimize impacts of flooding, FAO SWALIM has developed a system for monitoring river breakages along the two rivers using Remote Sensing and Geo-Spatial tool. The system started in 2014 and provides data and information on river breakages including potential, open and closed breakages.

This database (http://systems.faoso.net/frrims/rivers/breakages) is availed to the Federal Government and all humanitarian and development agencies before the onset of the rains to help them plan, design and implement activities to close open river breakages. Timely closure of open river breakages reduces flood damage to cropland, livestock and other property and also minimize displacement of people due to flooding.
This was demonstrated in short rains in 2015. Just before the onset of the season, which was actually an El Nino season, SWALIM updated the river breakages database and disseminated information to different partners. This triggered quick intervention by FAO and other partners to close the open breakages and reinforce the weak river banks. As a result there was minimal flooding in many areas of the Shabelle, unlike in previous years. In Jowhar district, a comparison between 2015 and 2016 identified that only 12,200 hectares of land was flooded, compared to 21,300 hectares flooded in early 2015, a 43% reduction in flooding, despite the fact that 2015 was an ElNino season with much higher river flows. The reduction in the flooded area was attributed to the early action taken by the government and intervening agencies based on the SWALIM river breakages database.

Monitoring of the river breakages however has some challenges mainly because of heavy cloud cover in the rain season which hinders identification of the river breakages. To solve the challenge of cloud cover SWALIM is looking into possibilities of partnering with organizations that provide radar images which can penetrate clouds. More field verifications are also needed to get additional details on the breakages for more informed interventions. For this, SWALIM plans to work more closely with the Federal Government Ministries and Disaster Agencies, as well as other non-governmental partners. 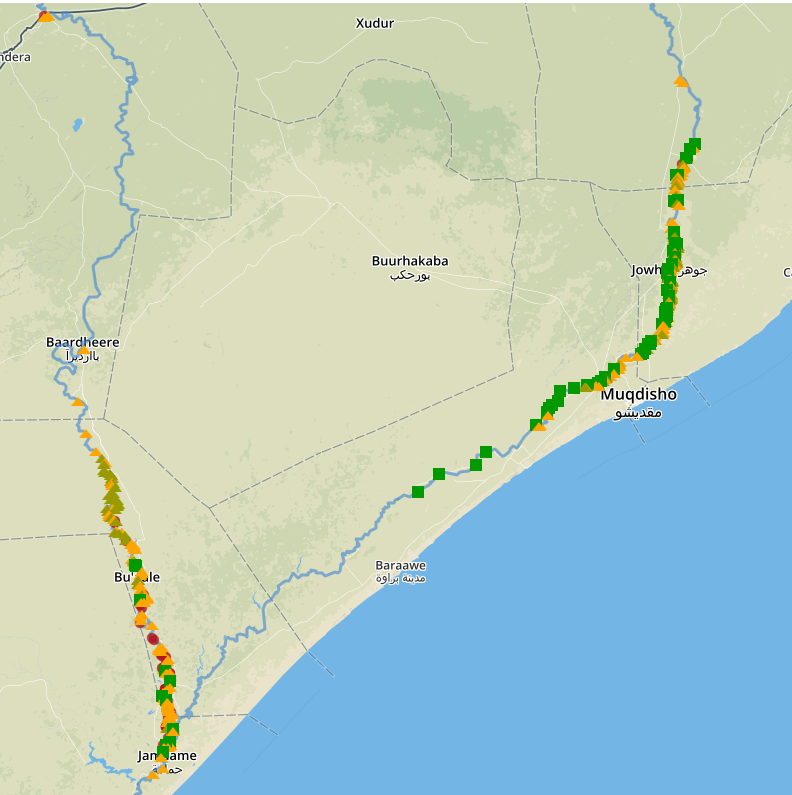