Charcoal is a main source of cooking fuel in Somalia and is also a major source of revenue for the community. Charcoal production triggers deforestation and has led to environmental degradation. For instance, the loss of the protective tree layer has the direct consequence of increasing the underlying soil’s vulnerability to erosion by exposing it to agents such as winds and heavy rains (FAO, 2007). Charcoal production accelerates the process of desertification, decreasing the amount of land useable for agriculture or grazing and pushing locals out of areas as they become uninhabitable after charcoal producers clear all the trees. This deforestation also decreases bio-diversity as species that relied on the tree groves are unable to survive without them. Degraded rangelands due to tree felling to meet the increasing charcoal demand are a common sight across Somalia.

Larger and consequently denser trees are selected for charcoal production. Therefore, the main and preferred timber species is Acacia bussei. A recent study by FAOSWALIM for Puntland estimated a 5% loss of this tree species annually. This estimate can be applied across Somalia. Another study by SWALIM focusing on Jilib area estimated a 3.3% tree cover loss within a very short period (2011-2013). This loss was solely attributed to charcoal production in the region. Large scale charcoal production concentrates first in areas where tree density is higher and distance from main roads, agriculture areas, and settlements is low, but also, as tree cover diminishes, new access roads are built to exploit areas further away. Tracks/access paths are a common feature at/around charcoal producing regions.

In some cases, the trees are felled at a different site and transported to another one where the kiln is made for charcoal production. In Somalia charcoal is produced in ‘kilns’; a type of oven.

The cut trees are piled up, covered with iron sheets, and buried with sand. After the oven burns for up to a week, the sand and sheets are removed. The wood has then turned into charcoal, which is then packed into bags/sacks ready to transport for export or domestic use (often using tracks and ‘dhows’; lateen-rigged ships with one or two masts, used in the Indian Ocean). Large quantities are transported each year to the Arabian Peninsula, despite a UN ban on charcoal export.
The study area covering the districts of Jamaame, major parts of Badhaadhe, Kismaayo, Jilib, Bu’aale, Afmadow, and minor parts of Sablaale, Diinsoor and Saakow and measuring about 36,700 sqkm was defined using both Landsat images classified as Forested areas and the observations made on VHR considering the area affected by deforestation for charcoal production.

Multi-temporal dataset of very high-resolution remote sensing images such as WorldView-1, 2 and 3 were used to map kiln locations in the study area. The acquisition dates of the images range from 2011 to 2017. Charcoal production sites can be seen on satellite images as dark round/ almost round patches. Many small tracks/ paths are a common feature at these sites. They are used for access and transport. The average radius of the kilns is 3.3m but some are as big as 6m in radius.
Multi temporal analysis of vhr images reveals a tremendous increase of charcoal sites over the years.
bridgemedia | Nike SB Unveils Parra-Designed Olympic Federation Kits 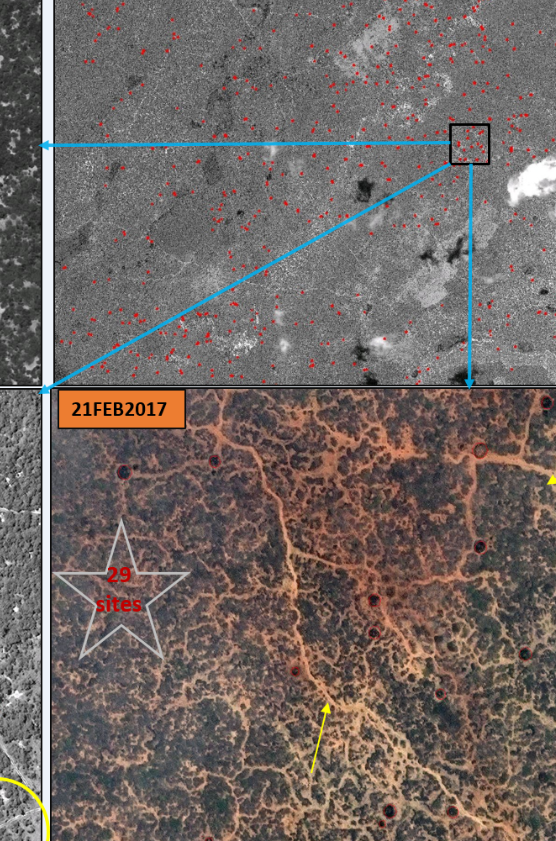