Somalia Facing Risk of Floods in the Juba and Shabelle Basins

The 2020 Gu (April-June) seasonal rains continued to intensify across Somalia during the 4th week of April. Compared to the previous two weeks, there was a significant increase of rainfall in most parts of Somalia as well as the eastern Ethiopian highlands. Many areas observed more than three days of consecutive heavy rains across the country. The good rains received so far have continued to replenish water and pasture resources. An improvement in livestock body conditions and milk production has been reported as well. On the downside, parts of the country experienced flash flood and flooding has begun in the Juba and Shabelle rivers.

Following heavy rains, river levels increased considerably along the Juba and Shabelle Rivers leading to flooding along the Juba. Flash floods were also experienced in Bay and Bakool Regions.

Shabelle River: Heavy rains within the Shabelle basin both in Ethiopia and inside Somalia have led to a drastic increase in river levels along the Shabelle River. Most of the stations in the basin recorded 50 mm to 100 mm of rainfall in the last three days. In Belet Weyne and surrounding areas, river levels recorded a sharp increase in the last 72 hours, which has seen a rise of 3.50 m to 6.00 m as of today. This is only 0.50 m below the moderate flood risk level. The river level at Bulo Burti is 3.50 m, which is 1.5 m increase in the last 72 hours, and is 2.5 m below the moderate flood risk level; however, this is likely to increase rapidly in the next few days. In Jowhar, there has been a 1.00 m increase in river level in the last 24 hours following heavy rains in the area last night. A similar trend has been observed in Balcad and the lower reaches of the river. The river levels are expected to continue rising along the entire channel of Shabelle as more waters from the Ethiopian highlands are still streaming in. High risk of flooding is therefore foreseen along the Shabelle during this week and through early May. Existence of river breakages (50 points identified and reported by SWALIM in February 2020) is likely to exacerbate the flooding situation unless urgent measures are taken.

Juba River: River levels increased sharply last week following heavy rains in the Ethiopian highlands and within Somalia. Flash floods were observed in Dollow town leading to destruction of some business premises and houses. Further, riverine flooding has been reported north of Dollow town where the Dawa and Juba rivers converge, leading to inundation of unconfirmed acreage of cropland. Floods were also observed around Luuq town leading to inundation of cropped area. In Gedo region around Bardheere, river levels remain very high and have surpassed the high-risk flood level this morning. Flooding in the area started since 23 April 2020 and continues to date.  Middle Juba and Lower Juba regions are experiencing high river levels with flooding being reported in these reaches. River levels are expected to fluctuate in the coming week with a high risk of flooding along the entire Juba river channel.

In Bay and Bakool regions: Heavy rains resulted led to flash floods which have affected some IDP settlements within Baidoa town. Bur Hakaba, Baardale, Huddur and Qansadheere districts were the most affected. Moderate risk of flooding remain in this area.

Puntland, Somaliland and Central regions: Since the beginning of the rainy season, moderate to heavy rains have been reported in many parts of the northern regions. In Somaliland, more than 10 stations in Woqooyi Galbeed and Togdheer regions recorded heavy rains of more than 50 mm to 100 mm cumulatively.  Moderate rains have also been observed in Puntland; however, a few places in Bari and Nuugal regions have only recorded light rains during the month. 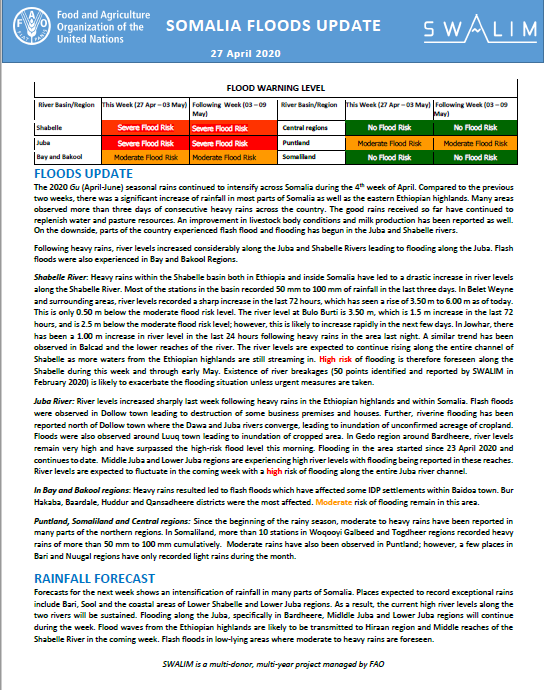